After almost being without an opponent, due to the impossibility of Islam Makhachev to attend the event this Saturday, Rafael dos Anjos (29-12 in MMA, 18-10 in the UFC) received a fight with a more desirable style, against Paul Felder. Before that, the Brazilian was defeated by Michael Chiesa in January of this year, which solidified a bad moment, in which Rafael has a retrospective of 4 losses and 1 victory in a period of 2 years.
Despite this, we are talking about an excellent fighter, one who is cut out in pain and sweat. Dos Anjos is an artist of constant pressure, using muay thai with a high volume of blows and a lot of strength to choke and surround opponents. The takedowns are good for a fighter from jiu-jitsu, who in addition to a powerful ground and pound , is supported by an arsenal of excellent submissions. This whole set of skills is supported by an enviable physical preparation and a workaholic mentality in training and in the search for evolution in the sport. The biggest problems arise when the former champion meets wrestlersstrong that withstand physical pressure and do not easily fall, which is not the case for this weekend’s fight.
Paul Felder (17-5 in MMA, 8-5 in the UFC) is taking the opportunity to do what he likes best - swap it like there's no tomorrow. And it is not that he does not know what he is doing, quite the contrary, he does it very well. The Irishman is an expert in various types of standing fights, such as taekwondo and karate, but prefers to use them in a short distance, from where he throws punches, kicks, elbows, all coming from creative angles and with the difference of starting from a fighter who prefers counterattack. Paul's lust and intensity make him one of the most fun athletes to watch on the UFC roster.
The "Irish Dragon" comes from defeat to Dan Hooker in an event starring the two, which took place in February. Despite the stumbling block, it was a fun fight (as expected) that interrupted the two straight victories that took place in the clashes against James Vick and Edson Barboza. In all combats, Felder proved his worth by showing that to win it is necessary to leave a few years of life in the octagon.
We have two male guys fighting each other and the expectation is that there will be a fight that will make the fans excited, or at least on the end of the couch. What could ruin the plans, would be Rafael being able to knock down Felder and end the game in the grappling fight or on the ground and pound . But it is not what we want, nor what the gods of MMA want. If the two go for the good old exchange of punches and kicks, we can have an old show, with an advantage for the Brazilian. Rafael is intelligent and has the ability to control the actions and manage to take the fight, however, we have already seen that the Niteroiense leaves holes in the defensive game and a counterattacker like Paul Felder can explore this type of situation very well. Anyway, we still bet on Rafael dos Anjos. 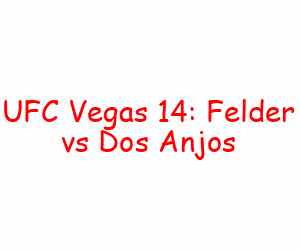