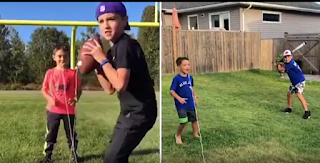 This is when the two brothers come up with some ingenious tooth extraction ideas - using a soccer ball and a baseball bat.

Nico Grennier, 7 years old, was left without the tooth that he had tied with a string with the American football, which was thrown into the air by his older brother Nolan, 9 years old.

The other method was applied with the baseball bat and the ball, which also had the thread of the hook tied and at the moment of the blow the tooth is extracted.

Their images have gone viral on the internet and so far have received thousands of likes, and has been shared by hundreds of people.