The match was too different between Brazil and Venezuela in the third round of the South American World Cup qualifying round. While Brazil is playing sublimation and showing the true bravery of a leading team in the region. On the other side, Venezuela is completely underdog when there are consecutive disappointing performances. Plus the forgettable past when meeting Samba dancers, failure is probably an unavoidable scenario for the Venezuelan visitors.

Before entering the 2022 South American regional qualifying campaign, Brazil showed a rather disappointing performance. Specifically, the team nicknamed Selecao did not win all 5 matches. That makes their fans extremely worried about the journey to conquer the ticket to attend the biggest football festival on the planet. However, with the bravery of a leading team in the region and the world. It is not difficult for Brazil to display its power. Accordingly, Brazil crushed Bolivia to 5 goals without equalizing in the opening match. Next, Neymar made a class hat-trick to help Brazil beat Peru with a strong score 4-2 on away field. With 6 complete points and a goal difference of up to 9-2, Brazil is now leading the rankings in a fully deserved way. This round, with being able to stay at home and only have to welcome Venezuela.

The Venezuelan visitors have always been a very underrated name in South America. In the 2018 World Cup qualifiers, Venezuela also played very badly when it came to bottom with only 12 points after 18 rounds. Entering the 2022 World Cup qualifying campaign this time, hope for Venezuela is not much. When during the past time, this team has not shown a clear improvement. In the opening round, Venezuela embraced a 0-3 hatred against Colombia on away field. It seems that with home advantage, Venezuela will get the first points when receiving Paraguay afterwards. However, the 0-1 defeat in the second round showed that Venezuela was still too weak compared to the top teams in the region. History has seen Venezuela draw 2 and lose 3 in 5 times against Brazil recently. The numbers show that Venezuela's hopes for points are limited. 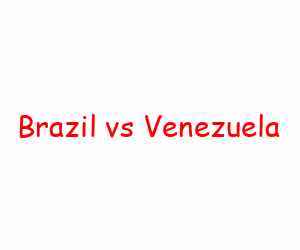